Local Food Britain member Francis Gimblett has launched the Campaign for British Cheese in a bid to generate more interest for our nation’s wonderful cheese creators and help to save this important part of Britain’s food heritage. 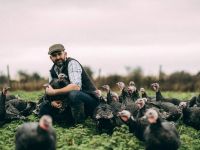