As a tough year moves towards its close, Steve and Anne of The Godstone Brewers have battled through every challenge thrown at them and still found the time to grow their brewery and build a new taproom at their Flower Farm home in Surrey. Here we catch up with them for our Stay Loyal to Local campaign. 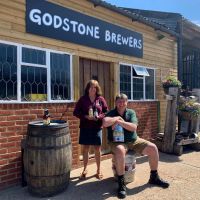